1. habit of mind, especially with respect to irritability or patience, outbursts of anger, or the like; disposition: an even temper.

2. heat of mind or passion, shown in outbursts of anger, resentment, etc.

3. a substance added to something to modify its properties or qualities.

Everyone loses their temper once in a while. Lately, I’ve had quite a lot to be angry about. I’ve experienced injustices of a personal, societal and political nature, and I’ve also made some epic mistakes. Sometimes it’s hard not to be perpetually pissed off.

Your temper is something you’re taught you should never lose, but that leads me to believe that it’s something you must first have.

You can’t lose something you don’t possess, and apparently it’s valuable or the whole world wouldn’t be urging you to hang on to it.

So I started thinking about this thing, this temper, and what it means to have it and to lose it.

If you look at definition number three above, you’ll note that a temper modifies you. Think of tempered steel. It’s stronger and harder than regular steel. It’s also magnetic. I want those qualities. 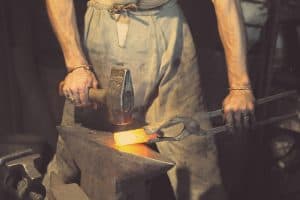 I want a backbone of tempered steel. I want to be able to withstand the slings and arrows of life. I want to persevere. I want to endure.

The temper is also contradictory. You can be even tempered, or you can have a temper, which means you’re prone to fits of anger. I like the idea that a temper can be what you make it, that you have choices.

I am going to try to let my temper temper me. I am going to attempt to let my righteous indignation about injustices make me stronger. I’m going to make an effort to stand up straight and make choices about the woman I want to be.

I want to gain my temper.

Share this...
Posted in Self Management and tagged #emotions