“Later in time, I came to learn that Tubs liked fables, parables, stories,  aphorisms and well-wrought metaphors. According to him, the only way to truly understand something you haven’t directly experienced is to have a clear, symbolic picture of it, from the inside.

A fable, anecdote or story,” Jorge claimed, “will be remembered a hundred times better than any theoretical explanation, psychoanalytical interpretations, or formal approaches.”  ~ from Common Factor, Let Me Tell You a Story

As I work intently on developing the interactive online course tied to the Sense of Self Method, I have turned often to many different resources for inspiration–and this weekend I stumbled upon a “golden find.”

While in a local independent bookstore (my favorite kind!) I found myself first drawn to the cover art and the title of a book simply named “Let Me Tell You a Story.” I picked it up and began by reading the prologue (a ritual of mine!) to get a sense of what someone else has to say about the book I “might” be reading…

Then I sat in a nearby chair, for in my favorite independent bookstores sitting and reading is encouraged and this book cover even suggests it… 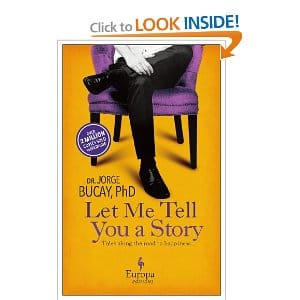 Twenty minutes later, I purchased the book and here it is a day later and I am savoring the short chapters one pearl of a story at a time and being more easily inspired to craft story illustrations for the course I am doing my best to thoughtfully create.

For example in the chapter titled, Circus Elephant” the parable shared is to alleviate the idea of “I can’t do that… I can’t.”

The beautifully wrought metaphor in the brief story boils down to this central image:

“The circus elephant doesn’t run away because he’s been chained to a stake like that since he was very, very little.”

The creation of this interactive course related to the rich material of the book Healthy Sense of Self – How to be true to yourself and make your world a better place is an ongoing journey–a worthwhile journey indeed.

I am abundantly grateful to the pilot course participants as well as my team colleagues for their feedback loops–this has been a collaborative effort from the start and continues to be so.

What is also interesting to me is the biography of the author of this book! His Life Path of Self-Discovery has been all over the map in its own way–and what a journey he has been on himself.

Jorge Bucay (born October 30, 1949) is a gestalt psychotherapist, psychodramatist, and writer from Argentina. His books have sold more than 2 million copies around the world, and have been translated into more than seventeen languages.

He was born in the Floresta neighborhood of Buenos Aires in 1949 to a modest family. He started working at the age of thirteen. In the course of his life, he has worked as a traveling salesman selling socks, books and sports clothing, as well as an insurance agent, taxi driver, clown, warehouseman, educator, actor, doctor on duty, host of children’s parties, psychiatrist, group coordinator, radio collaborator, and television host.

In 1973, he graduated as a doctor from the University of Buenos Aires, and specialized in mental illnesses at the Buenos Aires Pirovano Hospital and at the Santa Mónica clinic.

He currently defines his job as professional helper. He divides his attention between attending therapeutic teaching conferences, which have taken him around the world, and the writing of his books, which he considers therapeutic tools. ~ from Wikipedia

In the case of our own Self development, how often do we feel like that little elephant? Who first put a chain and stake in the ground to control your natural self-expression, curiosity and vitality?

We create this  online interactive experience of Self-Discovery with the intention that the very process itself  is a healing and therapeutic journey–that you may come to realize you can pull up that stake, liberate and restore your Self to be fully self-expressed and travel where you choose.

Stay tuned and now back to the creation process!

“You only have one life to live; make sure it is yours!” ~Antoinetta Vogels

Posted in Books and Other Products, Recommended Reading