Because a semi-colon only represents a pause in a sentence, not the end, it has become symbolic for many people who have suffered from the effects of mental illness.

Ten years after her father committed suicide, Amy Bleuei began the mental health awareness program, Project Semicolon in 2013, using this symbolism to make a point about mental illness: it doesn’t have to end your story. 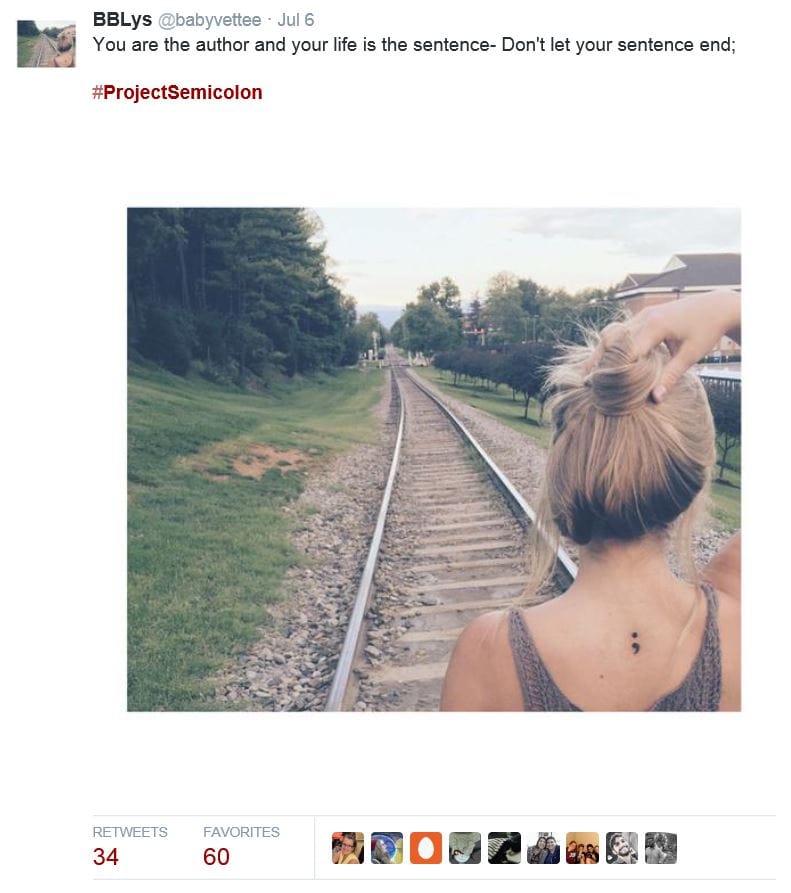 Lately, the project has been gaining lots of attention on social media as more and more people are tattooing themselves with the image of a semicolon and posting pictures of their semicolon tattoos with #projectsemicolon or #semicolonproject.

The Project Semicolon website states that “A semicolon is used when an author could’ve chosen to end their sentence, but chose not to. The author is you and the sentence is your life.”

The group’s mission statement is a follows: “Project Semicolon is a faith-based movement dedicated to presenting hope and love for those who are struggling with depression, suicide, addiction and self-injury. project semicolon exists to encourage, love and inspire.”

While the group is faith-based in Christianity, its website makes it clear that all people of all beliefs are welcome as Bleuel works to honor her father and tell her story through the platform while connecting with others who share similar struggles.

“I wanted to tell my story to inspire others to tell their story. I wanted to start a conversation that can’t be stopped, a conversation about mental illness and suicide so we can address it and lower those rates,” Bleuei told the USA Today Network.

The rates that Bleuei is referring to are far too high: according to a recent report from the Center for Disease Control and Prevention, suicide is the 10th leading cause of death in the United States.

We hope that the movement continues to rise in popularity and sparks conversations all over not only our own country, but the entire globe.

If you or if someone you know needs help or is experiencing suicidal thoughts and/or tendencies call 1-800-273-8255 for the National Suicide Prevention Lifeline.

Share this...
Posted in General Despair and Anxiety, Mental Health